Bernie Sanders at the University of Minnesota

Recently, Hillary Clinton´s “Stronger Together” campaign trail stopped by at the University of Minnesota in Minneapolis which gave me the chance to attend my first rally in the U.S. Clinton herself was not present during that event and campaigned elsewhere in the country. Instead Senator Bernie Sanders from Vermont, who was her biggest challenger during the Democratic primaries, campaigned for her and was highly anticipated by students.

Although the event took place on a Tuesday afternoon in our beautiful auditorium, the event location was sold out. It seems that all politically interested students found some time in their schedules to see that candidate who had captivated the enthusiasm of young voters like no other candidate during the long primary season and who has inspired political engagement and participation with his grassroots campaign.

In addition to Senator Sanders, politicians of the Democratic-Farmer-Labor Party (DFL) ‒ the branch of the Democratic Party here in Minnesota – gave speeches to promote their races for the Minnesota State House. This year's State House election in Minnesota, which also takes place on November 8, 2016, is even regarded as one of 20 battleground chambers in the country with the Republican Party currently holding a majority of 73 to 61 seats in the State House of Representatives. The Democrats control the State Senate instead. Thus, the DFL aims at winning the majority in the House of Representatives which would give the party the control over both branches of government since Governor Mark Dayton is also a Democrat.

The most fascinating speaker of that day was Ilhan Omar, an American woman born in Somalia, who runs for district 60B in the Minnesota House of Representatives, which includes the University of Minnesota and some neighborhoods around campus. 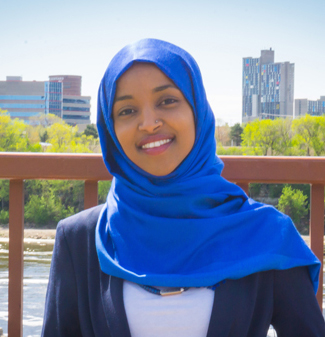 Ilhan Omar, a Somali American politician (DFL) from Minnesota. If elected to the Minnesota House of Representatives in November, she could become the first Somali-American legislator in the United States and the first Muslim woman to hold office in her state. (Photo credit: Courtesy of Wikipedia)

Omar and her family fled the country’s devastating civil war at the beginning of the 1990s and immigrated like many other Somalis to Minnesota. Today, around 25,000 Somalis live in the Twin Cities’ metro-area. After Omar’s victory over the long-serving representative Phyllis Kahn in the extremely competitive DFL primary for the seat in the State House, she now has the historic chance to become the first Somali legislator in the U.S. Especially, the support among students in the neighborhoods around campus have given her the decisive advantage over her opponents to win the nomination and possibly the race. Omar’s Republican opponent in the General Election Abdimalik Askar, who was born in Somalia as well, just announced that he is suspending his campaign, which gives Omar a huge advantage. Nonetheless, he will remain on the ballot since the Republican base in my electoral district is rather small and has not been able to find an alternate candidate. Although the race is more or less already decided, both candidates have had an important impact in energizing the large Somali community of the Twin Cities, especially in district 60B, where many of them live. Omar´s campaign reported that 5,868 people casted their vote in the primary, which is an increase of 37 percent compared to 2014.

However, the speech most students anticipated was given by Senator Bernie Sanders. Since the primaries of the Democratic Party for the presidential nomination, Sanders has become an idol for many young Americans. Therefore, I was really looking forward to seeing him in order to get an idea why my fellow students were so passionately supporting him.

Sen. Bernie Sanders (I-Vt.) speaks to young voters in support of Hillary Clinton’s campaign at the University of Minnesota on October 4, 2016.

When Sanders entered the stage, he received an incredibly warm welcome from the students. He delivered an energetic speech about social issues like debt-free college, a fairer distribution of the tax burden among U.S. citizens, and an expansion of the Affordable Care Act (also known as “Obamacare”), which has given millions of Americans access to health care. The audience did not stop applauding and cheering  for Sanders. It was impressive to see how he inspired just about everybody in the room. Thus, this rally confirmed my assumption that social questions are highly important for young Americans and cannot be ignored by any party with ambitions for the highest office in the United States. In order to benefit from Sanders’ strong support among millennials, Hillary Clinton has already adopted many of his points and included him in her election team. But despite their cooperation, Clinton remains unpopular among Sanders’ young supporters. Clinton, it seems, has been unable to inspire the same excitement and passion among this growing and increasingly important voter group. While young voters are 'fired up' for politicians like Bernie Sanders and Elizabeth Warren (D-Mass.), their relationship to Clinton is 'lukewarm', at best.

With that in mind, it will be interesting to see if Sanders is able to convince his supporters to cast their vote for Clinton and not another third-party candidate like Gary Johnson (Presidential Nominee of the Libertarian Party) on Election Day.