After the first four weeks in my new hometown of Minneapolis, where I will spent the upcoming year as an exchange student at the University of Minnesota, I can assure everyone that people here are already focused on the upcoming elections. On November 8, 2016, they will not only decide about the new president but also their congressmen and women in the House of Representatives.

Minnesota differs from other U.S. states. From September 23 on, Minnesotans are already allowed to cast an early vote which gives more people the chance to participate in the upcoming elections. Unlike in Germany, Election Day is not on a Sunday, but always on the Tuesday after the first Monday in November. As a consequence, a lot of people might not have the time to go to the polls because they have to work. Minnesota’s early voting system instead gives people the chance to vote whenever it is convenient to them. So they can avoid the often long waiting lines at the polling stations on Election Day.

Another difference between Minnesota and other U.S. states is the fact that Minnesotans can register for voting on Election Day. In contrast to Germany, U.S. citizens are not automatically registered to vote and have to do that at least 30 days prior to the election. Otherwise they are not eligible to cast their vote. A political science professor of mine regards this more flexible regulation as a decisive factor why the voter turnout in Minnesota is always among the nation’s highest. This can also be seen in the actual numbers. During the last Presidential Election in 2012, the turnout in Minnesota was 76.42% compared to just 54.87% on average in the entire country.

Americans constantly talk about the upcoming elections. Even before my plane touched American soil, I had a first interesting conversation with my seat neighbor, a professor from northern Minnesota. For hours we spoke about the elections, the candidates and the topics which are important to Minnesotans, especially for those living in the rural areas in the North and North-East. In these counties many people are very concerned about job security. They often work for the strong mining industry (Minnesota is the largest producer of iron ore and taconite in the U.S.) and fear that cheaper foreign imports and possible new environmental protection laws could endanger their workplace. According to my seat neighbor, such a climate of anxiety might influence some former Democrats to support the Republican Party presidential candidate Donald Trump and his proposed protectionist policy for the American economy. Yet, Minnesota can still be regarded as one of “bluest” states in America since Minnesotans voted for the Democrats during the past ten presidential elections. They did so even in 1984 when Minnesota was the only state (except the District of Columbia), which voted for the Democrat Walter Mondale instead of the Republican President Ronald Reagan. 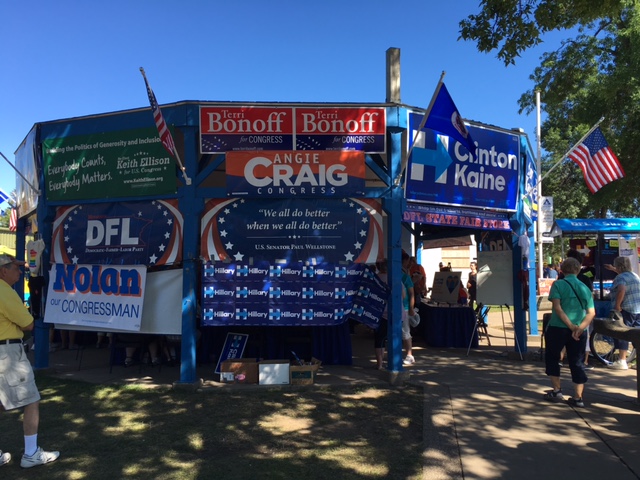 Both major parties have started their campaigns here in Minnesota. On the Minnesota State Fair, for example, which is one of the biggest agricultural fairs in the entire country, Republicans as well Democrats had their own booths where they informed people about their party’s and candidate’s goals. Apart from receiving flyers and first-hand information, visitors were also able to purchase merchandise of the candidates like Donald Trump’s famous “Make America Great Again” cap or Hillary Clinton T-Shirts. In the US the candidates rely on the revenues from these merchandise sales to a certain degree in order to finance their campaigns. This is definitely a point where the U.S. differs from Germany. 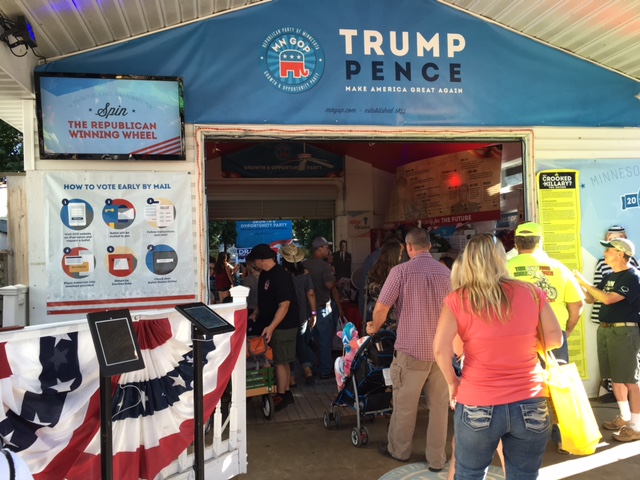 Booth of the Republican Party of Minnesota at the Minnesota State Fair 2016 (photo credit: Tobias Luthe)

All in all my first weeks have definitely been dominated by politics. It is interesting to see that not only the media but also ordinary people already discuss the presidential election in November. Without hesitating they often claim that this might be one of the most interesting and important elections in U.S. history. Therefore, I am really looking forward to observing how Americans, especially my fellow students on campus here in Minneapolis, will perceive the further development of the different election campaigns.